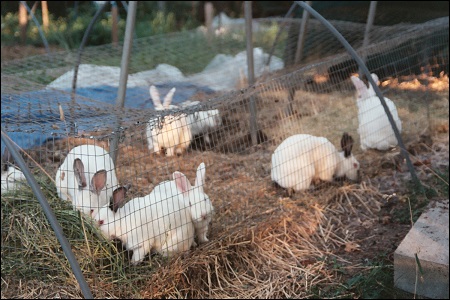 Are you interested in switching over to colony housing for your rabbits?  Are you already using this method and experiencing some complications, or want to make your approach more effective?  If so, you may be interested in a project we've been working on here.  Rabbit Colonies: Lessons Learned is an in-depth compilation of everything we've learned in the last 15 years of working with rabbit colonies. We have put this work together as a large PDF document.  It is chock-full of the issues we've faced over the last 15 years, and detailed descriptions for how we solved them.

Here's a small sampling of what our publication covers:

Imagine the benefits of having all this information up front, instead of facing these challenges one after another and having to reinvent the wheel!  We have created this publication as if we were talking about these issues with you over the kitchen table, working through whatever ideas, challenges or goals you're working on.  We know this information will provide many benefits to those who want to switch over to colony rabbit management, and those who want to make their existing operation better.

*You can shop with confidence with Frog Chorus Farm; we offer a money-back guarantee on all our products.*

Today's domesticated rabbits are generally housed in single occupancy wire cages. Each cage is often no bigger than 2' x 3' in size, and is often suspended off the ground so that the animal's manure and urine can drain freely through the cage mesh to a collection point below. The vast majority of rabbits never spend any time outside those cages getting exercise, grazing, socializing or building nests. From the rabbit's perspective, that's a pretty dull life.

In contrast, domesticated rabbits which are kept as pets have proven to do well under very different conditions. They can be trained to a litter box, they enjoy socializing with other rabbits (and even other animals), they enjoy hiding under natural overhangs and in cubby-holes, and they very much enjoy grazing grassy and brushy growth. If I were a rabbit, I'd definitely prefer housing which wasn't limited to the contents of a wire cage, and which allowed some opportunities for more natural behaviors such as social grooming, grazing and hiding under cover.

For folks who want to provide species-appropriate housing for their rabbits, there is a compromise between these two options. That middle-ground is informally known as colony housing. That's the system we use here, and we've generally been pretty happy with it. It is a bit more work than single occupancy wire cages, and it doesn't offer quite as many niceties as total freedom would offer to pet rabbits. Yet we feel it is a good compromise.

Colony housing is nothing very complicated, and different farms will use slightly different setups:

* housing can be anything that provides adequate space and protection for the rabbits within. That could be a large traditional hutch suspended off the ground, a ground-level fenced enclosure, or some combination. The housing would have to provide cover from both direct sun and precipitation.

* most colonies have fencing tall enough that the rabbits can't climb or jump over. Some colonies are allowed to dig, but that presents the risk of the rabbits digging out of their enclosure. Some colonies are maintained on solid flooring so they can't dig, for instance in barn stalls with wooden plank or poured concrete footing. In that case, the rabbits must be on either absorbent bedding or litter trained. Since rabbits so intensely enjoy digging, one compromise is to offer a kids' wading pool filled with dirt, so the rabbits can do limited digging without actually getting out of the enclosure.

* Pregnant does can be housed in colony settings, with some adjustments. Some herds are maintained with satellite nesting tunnels, rooms or chambers which each doe can choose as she will. Some of those nesting arrangements also allow the human manager to work with the kits either by closing the doe out of the nest chamber, or simply lifting the nest box out of the enclosure. Some herds are maintained with the does kept in the group housing up until they are near delivery, at which time they are segregated away from the herd into more conventional individual cages.

* Feeding and watering can be handled just as with conventional single-occupation cages, or with a variety of alternatives. We have used wide through-the-wall pellet feeders with good results. We have also used hay feeders with good results. We have occasionally fed bulk roots and/or greens right in the main group cage, in different piles or bunches so that all the rabbits get a chance to eat. Only rarely have we seen dominance displays such that low-ranking rabbits were deprived of food.

* Medical care, either proactive or in case of injury/illness, is one of the few drawbacks to colony housing. Our first colony arrangement was a large pen which gave the rabbits plenty of room to exercise. But the rabbits would scatter when it came time to check individuals for pregnancy, segregate animals for any reason or treat minor illness or injury. We eventually rigged up a way to divide the group pen into smaller and smaller pens, thereby restricting the rabbits' movements until we could more easily capture the one(s) we wanted. As we build newer pens, we build in gates and other division methods so that we can quickly restrict the rabbits into small spaces where they can most easily be handled.

Any rabbits can conceivably transferred from individual housing to group housing, but there are ways to make the transition easier. The easiest way is to start with siblings who have already been together since birth. They can very easily be managed either in same-sex or mixed-sex groups for at least the first three months. Beyond that point, they must be segregated by sex to prevent unwanted breeding. Groups of does can generally be brought together, but it helps to give them a larger-than-usual group pen while they sort out their pecking order. It also helps to provide a multitude of hiding spots and furniture so that they can get away from each other for the same reason. Sometimes a single doe will be so dominant that she beats up on everyone; she may need to be kept permanently segregated from the whole. Similarly, sometimes a doe will be so low on the totem pole that everyone beats up on her. Again, she may need to be kept apart, or paired with younger animals which aren't so aggressive. Buck groups often work the same way - most of them get along as long as does are not around, but the occasional dominant or submissive animal might need to be separated.

Our first colonies were big wire pens out on grass. We moved the pens frequently and systematically over the pasture, so that the rabbits were always on fresh ground. That approach worked very well for using that particular piece of ground, and it cut down on our feed bill. But one spring, we got really busy and ended up leaving one of the pens in the same place for a number of months. Since the rabbits were on the ground, rather than suspended, we had to keep putting down bedding so that they would not be standing in their own waste. It was labor intensive but we just worked with it until we had the chance to move them. After moving that pen, we discovered that the rabbits' long term stay on that piece of ground had created a wonderful planting bed of almost the same size - 4' by 20' - that we were already using at the time. Given that experience, we now use some of the rabbit pens to deliberately create and fertilize future planting areas.

We have changed our pen design. Instead of one big square or round open area, we use the same 4'x 20' size. We build walls and doors into the enlosure such that we can open or close off different sections. This makes segregating and handling the animals much easier. Right now we breed in the group pen but we don't kindle there; instead we pull the does out and put them in separate cages. As the kits grow, we put them in their own group pen for grow-out.

We really like this system for its improved quality of life for the animals. Contrary to our previous suspicions, it actually makes management a bit easier because we're only servicing a few group pens instead of dozens or hundreds of individual pens. We do use a bit more cage wire to build all the different group pens, but assembly goes much faster than assembling new single-occupancy cages. Best of all, we don't have the rust-through in the floors like often happens with single-occupancy cages. This is because the rabbits move around so much more and don't pee or poop in just one place.