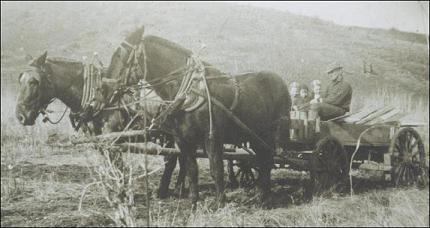 My father-in-law as a young child, in the wagon with his brother, sister and father, doing chores on the ranch outside of Ola, Idaho, approximately 1940.

“We are now entering the fourth decade since the power structure of American agriculture (since renamed agribusiness) decreed that the draft horse and mule had become useless artifacts of history. In that respect, the horse has been in some excellent company, such as crop rotation, small owner-operated farms, diversified livestock and crop programs, home gardening, the use of natural fertilizers (manure), and thrift. In brief, the decline hit most of the things that had lent stability to agriculture in good times and endurability in bad times ever since the days when Tom Jefferson had envisioned his race of farmer philosophers, which would serve as the balance wheel and strength of the republic. All of these things were discarded in haste following World War II. The work horse and mule were but two of many casualties.”
Maurice Telleen, The Draft Horse Primer, 1977

“The only difference between a pigeon and the American farmer today is that a pigeon can still make a deposit on a John Deere.”
Jim Hightower, Texas Agriculture Commissioner 1983 - 1991, current small farms/working families advocate

“Not so long ago many considered the art of working horses and mules in harness to be a dying craft. It was believed that, when the few hundred remaining old teamsters passed on, the work horse would reside solely as a historical relic; a curiosity, a cultural ghost. Few had envisioned, 25 years ago, that thousands would be drawn to this mode of work and transportation for practical as well as romantic reasons, but they have. Dwindling draft horse numbers have done an about face, with every breed showing substantial growth. Now, in corners all across North America, you can see workhorses and mules plowing, logging, mowing, hauling, seeding, and harvesting crops. Today over 200,000 people have chosen to depend on the workhorse or mule. Cottage industries have sprung up all across North America to support what has become an unexpected phenomenon, the revival of the work horse. Every indication is that this is not a fad or passing fanciful flirtation with the near past. It is a solid rebuilding of the architecture of the concept of, and feasibility of, work horses and mules as a motive power option, because many of us see the place, the need, and the value of the work horse in the modern world. And this revival is not an empty threat by a few fanatics to replace internal combustion. It is the dedication of many sensible, thoughtful, intelligent folk to the preservation, development and application of a humane modern animal power source as a reasonable option for today.”
Lynn R. Miller, Training Workhorses Training Teamsters, 1994

As the above quotes indicate, this nation was once proudly and capably carried by sustainable agriculture. Which in turn was competently and efficiently powered by animals - horse, mule, ox. All that changed after World War II, for a variety of reasons. Some would say it was simply the steady march of progress. Some would say that we finally had the industrial infrastructure in place to mass produce enough tractors to meet growing demand. Some would say farming families were anxious to entice their young war veterans to stay on the farm during peacetime. Some have claimed it was a deliberate, calculated attempt by industry to supplant self reliance in favor of dependency upon purchased goods. Whatever the factor(s) at work, it took only 15 years, from roughly 1945 until 1960, to make that conversion nearly complete. In the late ‘50’s, most figured that animal power was no longer a relevant option for American farms.

But during the early 60’s, something changed. I don’t know if anyone has ever nailed down the exact detail, event, or combination thereof. But enough folks either started to wonder if perhaps we gave up too much in those post-war years, or that perhaps tractors really weren’t as satisfying an answer as first advertised. They began to look back at how things were done in years gone by, and ask if perhaps those solutions might still be relevant. And apparently quite a few of them made the choice, partially or fully, to bring draft animals back onto the farm. That development began quietly, even secretly, les the neighbor or the townspeople or the family members learn of what was surely mere folly. But those folks laughed all the way to the bank as fuel prices continued to climb, parts and service got more specialized and more expensive, and the promise of cheap fuel burned out. The most current numbers available, and it’s a hard number to calculate, say that approximately 400,000 people in North America are using draft animals today as part or all of their farm equipment power source. Yet a stigma still exists that this is simply nostalgia, a refusal to get in step with the smarter modern way. Those who express an interest in pursuing animal power are carefully advised to get over such silliness and get back to work with accepted tools.

Why do I wax poetic and passionate about this topic? We have been searching for years now, for some form of efficient, reliable, sustainable on-farm power source. And we’ve been more and more disappointed in our search. Manual tools and two-wheeled walking tractors were of course cheaper, and for some tasks were absolutely the most efficient for our small operation. But what we saved in money, we lost in time and effort required. The busier we got, the less acceptable that was. When we expanded our search to include tractors, we seemed to have a choice between spending too much for a newer machine without issues, or buying an affordable machine with either known or strongly suspected mechanical problems. We did find a few tractors along the way which seemed a good compromise between mechanical soundness and affordability. But negotiations never quite yielded a mutually acceptable deal.

Our search wasn’t urgent in previous years since we were either working on a small scale, or working on other farms with their own equipment. But it came home to roost this year when we realized our rental pasture was spectacularly productive, if only we had scale-appropriate equipment to harvest it. At that point, we realized we were burning money to let that grass go to waste. So we began working the numbers in earnest. Would a tractor really be the best way to make the most of this new, larger crop? Or, do we dare join ranks with those who have committed to using draft animal power on the farm?

One rainy weekend this past summer, I sat down with all my receipts, all my projections and all my research, and started crunching the numbers. Given the land that we rent, the productivity of that land, the grass hay we consume and the hay we could harvest, the numbers were clear. At present acquisition, fuel and maintenance costs for either horses or tractor, the horses won by a nose. That was assuming that we used them solely for hay production. If we expanded our analysis to consider other power needs, the numbers favored horses even more strongly. And considering our existing use of, and need for, composted material for the market crops, the numbers improved again. This was no trip down nostalgia lane. This was, at least on paper, a sound decision.

But I felt compelled to continue checking. Perhaps my analysis had been skewed, or faulty, or lacking in some way. Someone else must have done similar comparisons; did they find the same thing I did? A Google search on “animal power versus tractor cost analysis” yielded some interesting results. A Swedish study compared the cost effectiveness of animal power as used during 1927, compared to the cost effectiveness of tractor power as was typical in 1996. In that comparison, the study found that farmers saw a 13-fold increase in external energy inputs on the farm during that time interval, with only a 2.4 increase in farm productivity. That study also found that 60% of the horse power inputs were renewable, while only 9% of the tractor inputs were renewable. Furthermore, that study summarized that a decrease in availability of either fuels and/or minerals may drive a return to animal power in that country, and not merely in the agricultural sector. An American study done between 2000 and 2005 found that a 40-year career of using horses resulted in a net income of just over $21,000, in addition to whatever crop income was produced with those horses. During the same timeframe, a farm using tractors would have a net cost of $70,000. In other words, there was nearly a $100,000 difference over 40 years when comparing tractor use with horse use, with horses not merely cost effective but profitable to use. Anne and Eric Nordell have written a column for the Small Farmer's Journal for many years, during which time they have chronicled the practices and performance at their horse-powered farm. Their uses of horsepower has allowed them to not only work the fields cost effectively but also stay out of debt.

So where do we go from here? We have a demonstrated need for some bigger energy source than what we currently have. And we have renewed our pasture rental for 2012. If a suitable tractor materialized on our doorstep, would we use it? Perhaps. In the meantime, we have three fit Morgan mares with an admittedly skinny list of to-do items on their daily schedules. So we have decided to move forward with making the most of what we have at hand, rather than holding out hope for some miracle deal. We certainly have a lot to learn about how to get into this teamster gig as safely, as competently, and as cost effectively as we can. Towards that end, yours truly is currently working with different trainers to get my own skillset honed and sharpened for what lay ahead. I have driven teams in the past, and I have trained horses in the past, but I’ve never combined the two. Nor have I the sheer volume of experience I’d want to have to do this on my own. But the decision has been made. We’re tossing our proverbial hat into the draft animal ring. We believe that our farm’s sustainability is best served by that choice, and we’re investing our time, money and effort now into making that choice a reality. We’ll keep you posted on our progress.