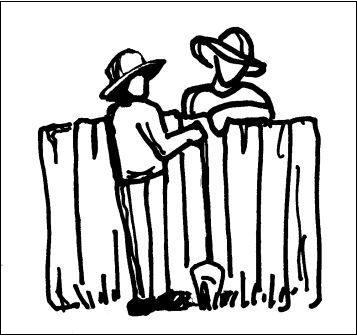 I spent the day today doing what us Irish folk love doing most - talking to people. It wasn’t just social visiting, or gossiping, or trading tall stories over a pint down at the pub. It was substantial talk, the kind that changes how we move through the world. And it’s always such a privilege when we get to share in this kind of interaction.

The first conversation was with a woman having problems with coyotes raiding her large layer flock. I first learned of her issues when she emailed to one of the livestock lists I’m on, asking whether a livestock guardian dog might be a good idea. Having worked now with livestock guardian dogs for several years, and having rescued four adult dogs from either being strays or being in bad working situations, I wanted to ensure her questions were answered, her immediate concerns met, her long-term goals figured out and put into motion, and that any dogs involved would truly be a good fit for her farm. And her farm be a good fit for the dog. We’re not done with that conversation yet. But I was happy to exchange lots of ideas and “maybe this but not that” with a gal who had been sleeping out in her barns and pastures at night, standing watch over her flocks. Now that’s a long night. Hopefully we’ve had enough information go back and forth that she can sleep inside soon. And sleep well knowing her animals are safe.

The second conversation was equally productive. One of the members of another email list mentioned in passing that he had put together a small handbook on home-scale and farm-scale solar power, such that homeowners and farm/ranch managers could do much of their own system design and construction work to create their own renewable energy. The concept of helping homeowners and farm/ranch managers not only design and build but also maintain their own alternative energy sources is just amazing to me. The stuff of sci-fi merely 40 years ago is now off-the-shelf technology, helping folks provide for their own needs. He and I talked about putting together a number of small systems for our operation here, such that I could have power in our various outbuildings and remote field locations without running extension cords from the main fusebox. And I won’t be fueling some Middle Eastern or Asian conflict to meet my power needs. Now that’s useful technology.

The third conversation was not only productive on a homestead scale, but exciting on a community scale. Small grains production in this country used to be a community affair. Farms would raise small plots of grain each year, not only for human but also livestock consumption. Kids, neighbors, family and friends would be involved in the harvest and processing of those crops. Such harvests would become community events - harvest festivals, threshing bees and shucking potlucks were a few of the ties that knit communities together. Then with the advent of larger and larger harvesting equipment, many of those events faded into memory, and then that knowledge started to fade from memory as well. But now, for a variety of reasons, we’re talking about raising small grains again. Today’s conversation focused on how to harvest, process and store small grains. Older small-scale harvesting equipment such as rattletrap threshing machines, binders, sickle bar mowers and the queen of harvests herself, the Allis Chalmers All Crop pull-behind combine, are coming out of the sheds, getting reconditioned and once again used for the purposes they were designed for so many decades ago. Neighborhood mills are grinding grain into local label products. Even micro-distilleries are popping up around the country, to take advantage of the unique regional grain characteristics. And locavores are closing the loop in their quest for the 100 mile diet. It’s been 20 years since I’ve attended a threshing bee, and I’m excited that such events may yet be a part of my future. Amber waves of grain are returning to farming communities around the nation.

These conversations are of course all just the starting point for the hard work yet to come. But those seeds of thought, of possibilities, of intentions, are being sown widely this year in our fine nation. We’re shifting away from the mentality of “this isn’t working anymore” into conversations about what we CAN do and what WILL work. Creative, homegrown solutions, not only to provide for our immediate needs but also the needs of our families, our neighbors and our communities. Being a part of that ongoing conversation is such a privilege. Let’s keep talking.