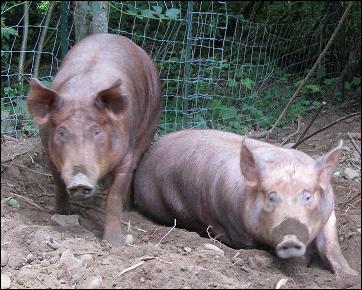 This past winter, I wrote about using Artificial Insemination (AI) as a preferred method for breeding pigs. AI has several advantages over working with live boars - easier than transporting either the sow or boar, less disease risk, easier for the handler, and more bloodline choices. So we looked forward to AI’ing our two young gilts in March.

Of course, life in general and farming in particular rarely ever go strictly according to plan. Such was the case this spring for us. When I wrote that blog entry, we knew that both our gilts were due to come back into season in early March, and then again in late March, either of which were good breeding dates for us. Yet in late February, we had a series of moderate-to-serious family emergencies which completely upended our schedule here. Dealing with those became the priority, such that only the most fundamental and/or crucial tasks on the farm were dealt with. One of the tasks which went unaddressed was the pig breeding. We didn’t even see them go into estrus during a nearly two month period. Therefore, not only did we not get them bred, we didn’t write down their cycle dates. We had to wait until they cycled sometime in April, then start the countdown over again. April came and went, and we were able to document their cycles and get back on track with our breeding plans. They were both due to cycle again in the third week of May. On May 16th, we bought in our AI supplies, enough for both gilts, such that we’d be ready a few days early. And then we waited.

Swine AI has one downside. Unlike AI for other species, boar semen is not typically frozen and withdrawn from a storage tank as needed. It is shipped fresh instead. Even when using a semen extender, it has a relatively short effectiveness period of only 4-7 days. And a sow’s peak fertility period only lasts approximately 24 hours, sometimes only 18 hours for gilts. So there’s a relatively small window of opportunity to get in the supplies, and use them, before either the gilt or the semen loses fertility. If a gilt or sow doesn’t cycle as expected, all bets are off.

I don’t know if it was the cold wet spring or I did the math wrong, but both our gilts’ cycles were a few days later than expected. That first batch of AI semen reached the end of its best-use-by date, and neither gilt had shown any signs of estrus yet. Sigh. As the saying goes, “you pays your money and you takes your chances.” In this instance, I had spent about $200 buying in the semen and insemination tubes that I needed. Of course the tubes would last indefinitely. However, the semen would not. On the 7th day after the semen had been collected, at the very end of its storage life, one gilt finally showed the first signs of estrus. Since there is a 24-48 hour period between those first signs and her period of peak fertility, I knew I had to order in more semen, pronto. So I got on the phone and ordered in more semen to be shipped overnight, at the cost of another $150. Happily, that gilt’s estrus developed normally, and my second round of AI supplies arrived that next day. I was able to give her two good AI sessions roughly 18 and 24 hours after the start of standing heat, which were both within range of her most fertile period. During her third and final AI session, she wouldn’t cooperate, which probably meant she was going out of standing heat. I had hit my first gitl’s AI scheduling right on target, despite the initial delay. One gilt down, one to go.

When I had tracked my gilts’ cycles earlier in the year, I knew that the second gilt would typically cycle five days after the first. When I ordered in that second batch of AI supplies, I knew that even if I hit the first gilt’s target dates, I would still be at the end of the use-by date for the semen by the time that second gilt came into standing heat. So it was no big surprise that the second batch of semen’s best-use-by date came and went before the second sow came into estrus. I had already blown my budget for what I’d wanted to spend on getting them bred, but I either had to hit this next estrus, or wait almost another month. I made the call, and ordered in more. The supplies arrived that next morning, and still no estrus. That next day, still no estrus. I started to wonder if perhaps I had missed her cycle altogether, in which case I’d just blown another $150. I was not pleased.

Then I remembered something I’d learned a long time previously. Sometimes a dominant animal of either sex will be so confident of their rank, that they will freely display estrus or rut without concerns about simultaneously defending their social position in the herd. However, when animals are closely matched in rank, sometimes the effort required to defend that social position can result in less overt displays of estrus or rut. It’s almost as if the animal is too “busy” maintaining that social ranking, to be bothered with sex. In those cases, sometimes teasing by the opposite sex is helpful, or even required, to bring about the hormones required for reproductive behavior. To be blunt, some foreplay is required. My pig mentor had also once told me that some sows seemed to need the scratching and playful shoving they’d receive from the boar, before they will stand for AI breeding. That seemed to correlate with the occasional need for foreplay. My two gilts were littermates, and the gilt I was waiting on was the more dominant of the two. But they sparred constantly, jostling with each other for dominance. I wondered if perhaps this gilt wasn’t showing her estrus because she was trying to hang onto her currently slim lead over her sister. So I tried something different with her. Two days ago, when that gilt should have been in a good solid standing heat, I launched Operation Flirt-with-the-Pig. I fed them dinner early that evening. About an hour after feeding, when both gilts were full and content and settling down for the night (thus, very little sparring behavior), I went back outside, specifically to work with the reluctant gilt. Boars will chant to their ladies, and rub their heads and snouts along the female’s side, and scratch the ladies’ sides with their trotters while they attempt to mount. So I duplicated these behaviors as best I could, having neither snout nor trotters. I spoke softly to the gilt in a low monotone, telling her how gorgeous she was, and I gave her good long back scratches, which I already knew she generally liked even when not in estrus. I spent about 15 minutes doing that, then went back into the house and waited an hour. Then right at sunset, I took my AI supplies back down to the pig yard, with my fingers crossed. And voila! That gilt was finally showing a good solid standing estrus. I was able to service her right then, then again early the next morning, and then again around 11am. By dinnertime that next evening, 24 hours after I’d first flirted with her, she was moving out of standing heat. It looked like I had hit my AI window of opportunity with her as well. And now we wait to see if they come back into standing heat. If they don’t cycle again, we succeeded with our AI efforts.

For those readers who are interested in pursuing AI for their own swine, there are a lot of good resources online for how to predict gilt and sow fertility, and how to do AI. I used the following websites and videos to learn this method: