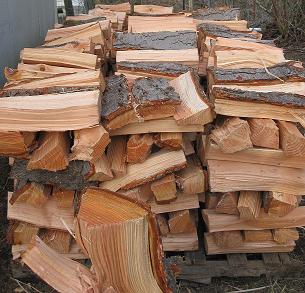 Ok, not literally. We don't have a counterfeit printing operation. Rather, we spent today creating material wealth, which is functionally the same thing as creating money. Specifically, some friends had offered us a truckload of firewood which had been sitting at their place for several years. They had harvested it but never needed it, and they didn't want it to go to waste. So for the cost of a relatively short drive and 45 minutes of effort, they helped us load enough wood to heat our house for several months. We saved money twice - we didn’t buy in wood, and we won't have to fire up the baseboard heaters. And the best part, we got to socialize while working. In fact you could hardly call it working.

That event today was just one example of how to “manufacture" money. It's a mindset where we look around for creative ways to solve issues on the farm without spending much in the process. Too many people seem to believe that if it's not purchased from a store, it doesn't exist. Or worse, they're convinced that new is better. Well, knock yourself out on that new pricetag. We’ll go the used route and enjoy most of the same benefit, without spending half as much.

But where to find those gems? There’s an entire industry of used, good condition supplies, building materials, household goods and farm equipment. Craigslist, eBay, freecycle, and building materials salvage centers are newer entries in that trade. But don’t forget garage sales, estate sales, auctions, and flea markets. You may not have all of those sources in your area, particularly if you're rural. But you or a nearby county will almost certainly have some of them, alive and kicking and begging to make your acquaintance. Let's do the math and see if driving into the nearest big-box store for an $800 fridge really beats out driving a little farther to an appliance recycling place to get nearly the same fridge for......... don't fall over in a dead faint on this one............. $80. Yep, that's how much we paid for a near-new refrigerator, delivered. Oh, and they took our old one free of charge. Or consider the used BCS walking tractor we got from craigslist at half the cost of new, by driving part-way to meet up with the Portland seller. WORTH IT.

Granted, I really have no right to tell you that you should shop here versus there. I bring all this up only because of something else I did today. I read through a long article in the Seattle Times about the state’s budget problems. Most of that article spoke in terms of "we either cut these programs or raise those taxes." Nary a word about HOW we spend our money. This is the same “gotta buy conventionally” as described above, writ large. I would propose the same solution: can we accomplish the same goals, provide the same services, for less money, through bargain hunting and innovation rather than deprivation? I know some of that creative thinking is happening here and there, as specific agencies or departments look hard for ways to get by on fewer dollars. And to those folks, I say more power to you. But examples of that kind of applied ingenuity seem few and far between.

As an example of how this can work at a community level, consider the following. I was affiliated for a time with a zoo in another state. It was a brand new facility, with only a few exhibits completed but more on the drawing board. Sure we had financial sources for operational costs and fundraisers for new exhibits. But some proposed projects were just too big. For instance, the tiger exhibit was going to cost a fortune to build. It was a high priority for various reasons, but was well out of reach financially. So zoo management looked for innovative ways to complete each segment of the project. The cliff-like facade which formed the back of the exhibit was one of the largest single costs, estimated at hundreds of thousands of dollars. But a nearby vocational college volunteered to design and build it for the cost of materials, saving more than half the original cost. Then a local fencing contractor agreed to waive labor costs for the exhibit fencing when the zoo agreed to allow small, tasteful signage listing his company as a sponsor. A similar arrangement was made for landscaping and the tiger pool area. One after another, community businesses and organizations traded work and materials for recognition, education and/or experience. Bottom line, the final exhibit cost an order of magnitude less than the original estimate, because the community found creative solutions.

Those are the conversations we need to start having at every level - on the farm, in the household, in local business, as communities and as a nation. We don't need to buy our way out of this mess. We need to revisit the methods which originally built this nation: creativity, innovation, intelligent application of resources and expertise, and community-level trading. As good as having a money machine.