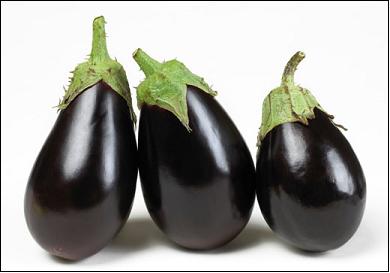 I have a confession. I despise eggplant. I had it a few times as a child, cooked into this or that dish, and I decided very quickly that this was not destined to be one of my favorite fruits. But I didn't stop there. I developed a hatred for this poor undeserving creature, and I dreaded the news from my mom that we would be dining upon it yet again. We didn't have it very often, but I remember thinking we could wait 100 years before having it again and that would be just fine with me. Finally, things came to a head when Mom decided that we were going to have a baked eggplant for dinner one night and both my brother and I thought "ew, not again". But something was wrong with that particular eggplant. It exploded in the oven while baking, coating the inside of the oven with a thick paste of half-baked eggplant goo. Of course we weren't home at the time so that goo was left to cook onto the oven walls. The smell in the house was incredible. We got home, discovered the accident, and Mom promptly started muttering about so much for that dinner. My brother and I didn't dare cheer in her presence, but we were quite relieved. That was the last time eggplant was ever served in our house.

Fast forward several decades, and my opinion of eggplant has mysteriously changed. I've warmed up to this big purple fruit, and not because I like the taste any better. Rather, I like to see those little eggplant starts growing in the greenhouse, putting out their characteristic big round leaves, looking for sunshine. When I look at them in their little seedling trays, I don't see eggplant casserole anymore. I see dollar signs. Those little starts sell quite well at market, and they grow well here. My partner has reported that she generally sells out of eggplant pretty early in the season, so they're one of her gotta-plant items first thing in the year.

Farming is defnitely about growing things that we enjoy. And for most folks, if they enjoy growing one type of plant or animal, it usually doesn't take much additional enthusiasm to grow other types of plant or animal (or both). So expanding our operations to grow a lot of different things is rather natural. If we're gardening or farming or raising livestock for our own purposes, that's usually the end of the selection process. Unfortunately, if we're trying to sell to market, that's only a part of the equation. The marketplace has as much to say about what we raise, grow and sell, as we do. Suddenly, personal preferences are no longer the only criteria.

I've had a number of people ask me what they should raise or grow when starting a farm. I usually give a two-way answer - "what do you want to raise, and what is your market?" Unfortunately, many wanna-be profitable growers and livestock owners don't look at what the market wants. They only look at what they like. Hence the flood of zucchini in August. If folks want to make decent income at this lifestyle, they need to know what their customers want even if they don't particularly enjoy it themselves.

It doesn't have to be misery for the farmer though. Folks can find a way to sell items they would never raise for themselves, or market products to the public in ways that are very tolerable. I remember one such instance where I attended a nutritional workshop for small ruminants. The speaker was extremely knowledgeable about sheep in particular, and how to raise feeds specifically for them. He'd talk with an obvious depth of experience about what they'll graze, what they won't, how quickly they'll browse through this-or-that type of pasture, etc. He would often refer to the sheep as "the little darlings" with a British accent that led me to think he absolutely loved his sheep. No wonder he had such a depth of knowledge. After the workshop, I thanked him for that presentation and told him his own flock must be very lucky to have such a knowledgeable owner. He laughed and said he'd sold his flock years ago. "Got so tired of the lambing and the banding and the shearing and the pasture maintenance, it just got to be too much. So I finally sold them all. Now I just talk about how to feed them, and that's enough for me." At first that comment really shocked me, and some how cheapened the knowledge which only moments before I had found so impressive. But thinking about it later, I realized that he'd been able to find a comfortable way to earn a decent living using knowledge that he had gained over many years, without doing work that he had come to find wearisome. I certainly won't be mailing him any lambs for his birthday. But that impressed upon me how important it is to identify alternate markets where we can provide either products or services, to the benefit of both buyer and seller. He'd found his niche and he was very good at it. The fact that he no longer wanted to raise sheep was a non-issue for his ability to continue to make a living with sheep.

So to the eggplant growing in the greenhouse, I can smile warmly at them every day between now and whenever they sell. I can water them and transplant them and tend them lovingly, knowing I can raise them well without ever having to dine upon eggplant again. Know your market, Dear Reader, and know what they want. If they want something you can provide, I'll bet there's a way to provide it even if you don't personally like it very much.