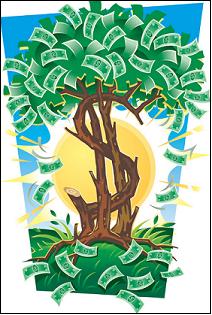 I have heard it said, far too many times, that farming is the art of buying at retail and selling at wholesale. I have also heard it said that the best way to earn $1 million in farming is to start with $10 million. More succinctly, it all boils down to a lament that drives me crazy because I hear it so often: “there’s no money in farming.” Know what I say? “Hogwash.”

Farming is many things - a lifestyle, a hobby, a passion, a career, a passing fancy. It can be all those things, and do very well at any of those scales of operation. But it can also be a business, run with the same philosophies, conceptual tools, planning methods, and decision criteria as any other business. The owner is ultimately the one who decides whether it will be a lifestyle, a hobby, a passion, a career, a passing fancy, and/or a business. The trick is, many farm owners don’t look at it that way. For whatever combination of reasons, the “business” portion is often ignored, avoided, neglected and/or denied. Even more oddly, some farmers react with distaste if anyone mentions the word “profit” in connection with their operation, as if that word was either unknown, unwanted, or otherwise unwelcome. Which is the beginning of the end of most farming operations.

If someone were to open a small grocery store or hobby store or bookstore or dentist’s clinic, they’d have the same market opportunities and challenges in front of them that a small family farm faces. Yes many details would be different - the regulatory landscape, the marketing niches and competition, public perceptions about what constitutes good food and good pricing. But the vast majority of the principles would be the same - know your market, know your competition, know your regulatory requirements, know your operating costs and for goodness’ sake, know your break-even points. But for some reason, the individuals who open the small grocery store, hobby store, bookstore or dentist’s clinic are all implicitly expected or even explicitly pressured to make a profit as part of whatever other community service and/or business goals they have. Yet farming is almost universally expected to lose money. That is a disease not of the business itself, but of the owner’s expectations and the public’s perceptions. No more, no less.

On the one hand, there’s probably a number of ways to turn that around. There are workshops and books and conferences and advisors and advocacy groups and marketing cooperatives galore, each with the goal of helping farmers make a decent living, stay on the land and keep that land productive. More recently, that productivity aspect of things has been further refined to meet “the Three E’s”: ethical, environmental and economic standards which help ensure not only short-term survival for the business but also long-term health for the community. All of that effort and support is marvelous, but for one big screaming weakness: farm owners need to be willing to make use of those resources AND put into practice what they've learned. Many farmers I know don’t make good use of those resources, for a variety of reasons. Sadly, even those that do often fail to put those methods into practice. If you ask them why they didn’t follow through, you’ll hear a lot of reasons. But fundamentally, I think it boils down to only three things: "it won’t work for me", "it doesn’t apply to me", "I can’t do whatever is needed to get it done". And so farmers continue to flounder.

Yet applying some creativity to that same situation can yield some impressive results. A third- or fourth- generation farming family in our own area was in danger of closing down. The husband and wife team had raised their kids on the farm, then watched them grow up and move away. Their particular type of farming had gotten too full of regulatory hoops for their taste, and making a profit had eroded down to squeezing the operation for every last precious penny. They were worn out, fed up, and nearing retirement age. None of their traditional farming strategies worked anymore. They were done. Meanwhile, one of their grown children had silently been mulling a return to the farm. He was married with kids of his own, and his big-city career no longer provided the quality of life he wanted for himself or his family. When his folks decided to get out of farming, he used that opportunity to get into farming. But to his credit, he completely re-invented his parents’ farm. He dropped the commodities production, he looked at modern market options and marketing strategies, and he brought his Corporate America business lessons with him regarding customer service, product diversity, pricing, competitiveness and a whole host of other skills which he had learned simply by being an adult in the business world. He turned that farm around within the space of a few years, and is now considered so successful that he teaches new farmers how to succeed at farming. The lesson here was that he looked at what was working, what wasn’t working, what he wanted, what he needed, and how to get it. He was not chained to methods or products which no longer made sense. That willingness to try new things, in an educated, carefully planned way, allowed him to succeed where the exact same farm in the exact same family had been on the brink of failure.

There is absolutely no reason why anyone and everyone else who wants to farm, should fail to make a decent living at it. Many, many resources exist to help new and existing farmers figure out how to not only live the life they want, do the work they want and sell the products they want, but also make the money they want. The only thing standing in our way is our own expectations. If we expect to lose money, we’ll probably find a way to do so. If we expect we’ll need to put in some time and effort to create a successful business, and then carry through with that plan, we’ll be in excellent shape to do exactly that.