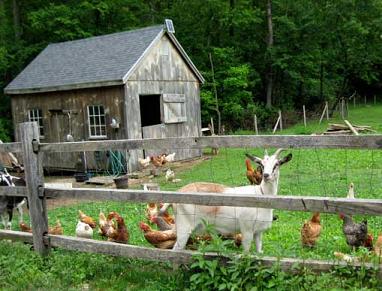 With the announcement of deregulated GE alfalfa spreading around the various livestock communities, many folks are wondering for the first time how they can go about raising their own feed. After all, the vast majority of small scale livestock owners have been working out of a feed bag for the past 50 years if not more. Yet that is not the norm for the bulk of small family farming history. It used to be very commonplace for folks to either raise their own feed on their own place, or partner with neighbors to raise feed in exchange for meat, dairy, eggs and other livestock products. If there is a silver lining to this whole GE nonsense, it would be that small scale producers are once again looking at how to provide their own feed.

But how? For most of us, our feed comes in only a few forms - baled hay, bagged silage or haylage, and a wide variety of pelleted combination diets with a myriad list of ingredients. Trying to figure out how to grow our own hay, create our own silage or haylage, or recreate those pelleted feeds can seem daunting. On the one hand, yes it is a complex business. On the other hand, we don't have to recreate those pellets, per se. We just have to recreate the proper ratio of nutrients within them.

The good news is, there is plenty of documentation available to teach us what we need to know. Most introductory livestock books include a chapter on nutrition, including how to put together a home-made or locally sourced ration. Some authors go much further. For instance, in Dirk van Loon's The Family Cow

, he devotes six chapters - almost 70 pages' worth - to the cow's dietary needs and how to meet those needs cost effectively. He is also the author of Small-Scale Pig Raising

, and in that book he devotes four chapters and almost 50 pages to pig nutrition.

Switching species and authors, Jerry Belanger devotes over 20 pages to the topic in Raising Milk Goats the Modern Way

. The first subheading in his Nutrition chapter is "Purchase Feeds, or Mix Your Own?" His book packs a lot of information into that 20 pages, including guidelines for using whatever feed ingredients can be sourced locally. Now that's money saving information. I won't go through all the books for all the domesticated species, but you get the idea.

For those who want a much more thorough immersion in the science of livestock nutrition, there's few better than Morrison's Feeds and Feeding: A Handbook for the Student and Stockman

. This is literally the textbook which has been used in college-level livestock nutrition courses for most of the last century. A new edition comes out every 10-15 years to provide updated information after more research results have come in from various nutritional and livestock husbandry experimentation. A word of caution though, that after about the 1950's, the editions turned more towards confinement feed and industrial sourcing, which made sense for the “go big” philosophy at that time. If you want a good foundation in nutrition theory and practice, stick with either 20th or 21st Editions. Apparently Amazon.com has both versions available (the link above is for the 21st edition from 1951). In addition to Amazon.com, used versions are often available at used book stores and via eBay. I found both the 20th and 21st editions on eBay for $5-$10 each. Can't beat that.

A third "oldie but goodie" is the classic Small-Scale Grain Raising: An Organic Guide to Growing, Processing, and Using Nutritious Whole Grains for Home Gardeners and Local Farmers, 2nd Edition

by Gene Logsdon. For far too long, his book was the sole source of information about how to raise plots of grain (anywhere from garden-scale to a few acres' worth) for homesteaders and small family farms. The first edition was written in the '70's, but it was updated in 2009. Either edition provides an excellent source of information today. We have the first edition and refer to it regularly. HIs family raises a wide variety of livestock so his grains book talks not only about how to grow the grains, but also how to feed them out in cost-effective and labor-saving ways. Even if you don't use much of the information in his book, it provides a lot more how-to-grow information than any of the previously listed books. Best of all, you'll feel like you're visiting with an old friend while reading it. Our dog-eared beat-up copy of the first edition ranks as one of my all-time favorite books.

If those books are old enough to make you squirm, and you're concerned you're missing out on new information, never fear. A variety of books have come out within the last 10-15 years about pastured livestock production, and incorporating traditional feedstocks into livestock rations to provide hay alternatives throughout the year. Joel Salatin has been instrumental in experimenting with, and writing up, pastured production for cattle, poultry, and rabbits. His books include You Can Farm: The Entrepreneur's Guide to Start & Succeed in a Farming Enterprise

. All three books speak extensively about how Salatin and his family bucked common feeding practices, and went back to species-specific, behavior-based feeding programs which harnessed each animal's instinctive feed habits. The latter two books speak in great detail about how these changes not only made money, but made it possible to earn good money.

Additionally, Jim Gerrish has a pair of books that should be in the hands of every ruminant owner in the country, along with any poultry producer or hog producer interested in pasturing their animals. His first book, Management-Intensive Grazing: The Grassroots of Grass Farming

, shows how to get the most out of any given pasture, while ironically making the pasture more robust and the soils more fertile. His second book, Kick the Hay Habit : A Practical Guide to Year-Around Grazing

, shows how to introduce stockpiled forage back into the rotation so that producers can reduce or eliminate their dependence on baled hay during the winter.

If you are concerned enough about GE crops that you want to grow your own, or perhaps you just want to see what's possible, there's plenty of information out there to get you started. How far you take it, and how much of your own feed you end up raising for yourself, is up to you. If nothing else, these sources of information would help you reach out to nearby producers that you can partner with. That can also be a potent combination, because you'd get the feeds you need, raised in ways you approve of, for far less than retail. And nearby growers are often delighted to work with clients who know what they want and will buy in bulk every year. Even if you don’t care about GE alfalfa, I heartily encourage you to explore some of these options. We don't need to live out of the retail feed bag. We never really did. And now the documentation is better than ever on how to raise our own feeds. To quote one of my favorite poetic passages, I encourage you "to strive, to seek, to find, and not to yield", in your efforts to secure wholesome non-GE foods and feeds. It can be done.