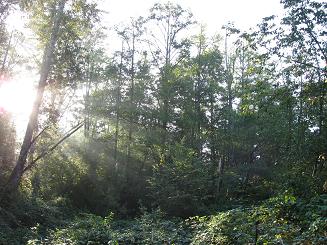 Our farm is not a picturesque assortment of tidy pastures and nearby outbuildings. I’ve already written about how we had no outbuildings when we first arrived, and we are still in the process of putting up new ones. We are also always in the process of clearing land. Our property was originally cleared of its native conifer forest approximately 100 years ago, but then let go to develop brushy pioneer species. In this area, that means alder, big leaf maple, wild cherry, blackberry, salmonberry, and a host of other understory species. By the time we bought our place in 2000, most of our land was so thick with understory growth that we couldn’t walk from one end of it to another. And the alder that had come in after the conifers were taken are nearing the end of their natural lives. With each windstorm, which are plentiful in our area in winter, we have a few more go down. As a result, land clearing for us isn’t simply a way to have more useable ground. It is a way to get access to the land so that we can start to manage it proactively, instead of letting the wind, the rain and the snow dictate which trees come down, in which directions, and then watching the blackberry take over and smother everything. Others in this region who have let their properties go have acres and acres of blackberry to show for that neglect. Ironically, by letting the land go “wild” in that way, we severely restrict which wildlife can then use that land. Anything larger than a raccoon has a very hard time moving through blackberry thickets. And the lack of sunlight reaching the ground means nothing will ever grow there once the blackberries take over. Unless that blackberry is removed, the land becomes almost sterile. But how to proceed?

I worked for a year to clear two small areas near the house, and it was an ongoing project. I’d clear away blackberry vines from a 50’x50’ patch and four weeks later, you’d never know I’d been there. Sadly, they also grew back with more thorns. Few things are as disgusting as clearing land once, then having to go clear it again and have it be twice as prickly in the process. Plus, at that rate I’d never get even a small portion of the total property cleared. I had to do something else.

The year we got goats was the year everything changed. Goats are not grazers like horses, cows and sheep. They are browsers, which means they prefer shrubby and leafy growth rather than grass. They will definitely eat grass, but if given a choice they will snarf down brush like it’s going out of style. And they absolutely adore blackberries. Our first two goats could clear a 50’x50’ area in a few days. It took me longer to build the fence to contain them than it did for them to eat the entire contents of the yard I’d just fenced. We figured we’d found our answer to clearing our land. But the blackberries weren’t so cooperative. After the goats had taken the vines to the ground, a few weeks later the blackberries sent up new vines, and it started all over again. It took the vines longer to come back up from soil-level, but return they did. At that point, a scorched earth policy was starting to look pretty good.

The year we got pigs, that changed again. While goats love above-ground growth, pigs go for either above-ground or below-ground yummies. And it turns out, from a pig’s point of view, blackberry root nodules are yummy. So we turned the goats back into that 50’x50’ yard to clear the top growth, then turned in the pigs to root out the bottom growth. And root it out they did. For the first time in years, we had a yard that was not only free of blackberries for the short term, but looked to stay that way for at least a while. Yet we still weren’t done yet. Nature abhors a vacuum, and eventually something would grow there, whether we planted it or that seed drifted in on its own. So how to prep the land for planting? Once again we turned to critters, but this time it was the cows.

Cows are amazing creatures. They are natural terraformers, if given the proper supplies. By simply feeding them their grass hay on the ground, and then rotating them through various areas, we have been able to lay down a fertile mulch over just-cleared areas such that not only will blackberries not come up immediately, but grasses and forbs will. The combination of waste hay, cow urine and cow mature is a potent mix to create that living mulch, but only if the cows are kept moving and don’t stand around in one area too long. If they do stand around too long, it becomes a mucky muddy mess. But managed even moderately well, cows can remake a landscape.

So now we have multiple yards undergoing conversion at any given time - the goats go in and clear the above-ground brush, the pigs go in and root out the below-ground roots, the cows go in and then do what they do best - eat, poop, pee, and lay around. Slowly but surely, we’re creating those nice pastures which are traditionally associated with tidy small farms. It’s an ongoing process, to be sure, and my time is just as critical along the way. Instead of clearing land, now I’m perennially building more fence and repairing the fences we already have. The land is responding nicely and we finally feel like we’re making progress. Land clearing isn’t for the meek or the shy. But it can be done and done well, in a variety of ways and with a variety of tools. Not everyone wants goats or pigs or cows. For us, they worked extremely well.