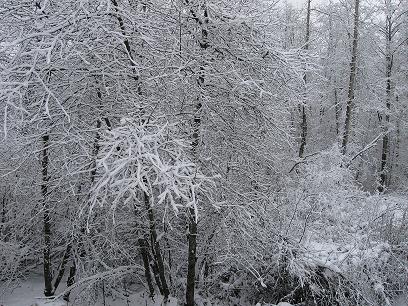 Our storm arrived, a little later than expected but just as energetic as predicted.

One of the benefits of modern American rural living is that you still have contact with most of the rest of the world, via the Internet. Usually that’s just fine; I can turn on, or off, that connection as I prefer. But some days, like today, we stay glued to the forecasts and that leads to something of an anticipation overload: how much snow will we really get? When will it start and when will it stop? What will the roads be like? How much wind? What’s the latest radar? What’s the latest satellite? I sometimes wonder if this orgy of information is really such a good thing. I found myself today trying to remember what it felt like as a child to magically have it start snowing. That was always such a joy. I wonder if I’ve lost that enthusiasm because the surprise is gone, or because I’m responsible for cleaning up the results. Either way, I miss that enjoyment.

This particular storm didn’t really get going until after evening chores, so we had this brooding knowledge of its approach hanging over us all day. In a way I’m glad it came late because that gave us nearly the whole day to do whatever we still needed to do in preparation (which wasn’t much). The downside of that is that the later it starts, the later it stops, and the later I get to bed. The surprise with this particular storm was the winds. The forecast had predicted winds, but only after the storm had warmed from snow to rain. I guess the winds didn’t read the forecast because they arrived first. The subsequent snowfall was blizzard-like which we don’t see out here very often. It reminded me of the prairie blizzards we used to get in Colorado where I grew up. I guess I answered my own question about the joy of a snowstorm - the winds provided the surprise but I couldn’t enjoy them much with thoughts of trees coming down in bad places. I wonder what it would take to reclaim that joy; perhaps a farm without trees that can smash buildings. That would probably help.

I knew with the snowfall (and especially with the wind) I’d need to check the stock overnight at least once, just to make sure we didn’t have storm damage. So the late arrival meant I wouldn’t be getting to bed anytime soon. That’s the way it goes sometimes. Still, there’s something special about being out in a storm at night, when no one else is out and no sounds from the road. Just me and Ma Nature, sharing the evening. Sometimes I enjoy those quiet moments. Tonight I was on a mission to finish up and get back inside so I could warm up and dry off again. Not even the dogs wanted to be out in this stuff. Still, it’s good to acknowledge the boss at any given time and She’s definitely the boss. We can put a man on the moon but we can’t turn off the sky. I’m not sure I want to live long enough to see us able to. Hopefully we never will.

One of my farming mentors once told me that “farmers live and die by the weather.” Many recent improvements in livestock husbandry and cropping systems have reduced that fragility, at least a bit. Cool season extenders, all-weather shelters, tank de-icers, and the like all take a bit of the edge off. But just as there’s something special about standing out in the midst of a storm in the middle of the night, there’s also something very special about checking on the stock and finding them all safe and warm and dry in the buildings that you put together with your own hands. It’s certainly not a mastery of nature, per se. But it’s nice to know we can provide such shelter for our working partners. They give us their working lives; least we can do is give them a comfortable place to ride out the storm. So I was grateful tonight as I made my rounds, that the wind and snow had been held at bay at least for the time being. All the stock were comfortable, warm, dry and content as the storm howled out its energy.

I don’t know that I want to think in terms of “living or dying by the weather”. That sounds too much like an ultimatum. I’d rather think in terms of our farm living in partnership with it. We work with the various seasons, the conditions of wind or rain or snow or sun, as best we can and with as much respect as we’re able at any given point. But when the weather is in a mood, we quietly and respectfully stay out of the way until it’s all over and calm returns. Perhaps that’s as good as it really gets.

NOTE: As an amusing irony, we lost power as I was trying to post this blog last night. Power was out several hours until those good folks at the utility restored it sometime this morning. My hat's off to those folks who are out in all conditions doing those particular jobs. I guess Ma Nature wasn't quite done making sure we knew who Boss really was.