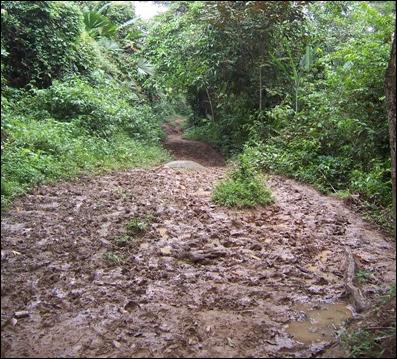 Mud is a reality on most of the farms I’ve ever visited, including ours. Whether that’s seasonally or year-round, in some spots or everywhere, ankle-deep or axle-deep, mud is a factor to be considered in virtually everyone’s farm planning at some point. We’re no different here. Mud has been, and continues to be, one of the realities for on-farm design, management, health care and chore efficiency. The bad news is, mud can appear in the most amazing places, and some would argue its presence is inevitable. The good news is, mud can be predicted, studied and minimized. If we take the time and make the effort to do so.

One fierce combatant of mud, a gal by the name of Alayne Blickle, began as a horse owner who was battling mud on her own property. Instead of merely throwing up her hands in resignation, she began to study how mud occurs on the farm, how best to combat it, and how best to design facilities to avoid it altogether. Her work over the last 10+ years has evolved into a website called Horses For Clean Water, where she shares not only everything she’s learned in that time, but also workshops, downloads and blog updates for ongoing mud control work. The things she’s learned apply to all livestock operations, not just horse properties. We have attended several workshops either hosted directly or indirectly by her group, and have learned not only about mud control but also how layout can impact chores efficiency, how pasture management can impact animal health, financial returns and property value, and how new properties can design to minimize mud, or existing properties can tweak their infrastructure to minimize or eliminate mud.

So, how do we go from being a mud-pit to being a beautiful dry firm-footing farm? There are a number of ways, many of which are either no-cost or low-cost to install or provide. Alayne speaks of mud as being an acronym for Manure, Urine and Dirt. While mud can form simply from dirt and rainwater, mud on farms is often a combination of those three. So separating those three is a key ingredient to controlling mud. Here are some of her recommendations for keeping these ingredients separated so they never combine to form mud:

1) put rain gutters on all roofs, even outbuilding and barn roofs, and then channel the runoff away from those buildings. Those roofs collect a tremendous amount of rainwater, then concentrate that rainwater right where people and animals tend to walk - the periphery of buildings. The larger the roof, the more pronounced the problem without raingutters, and the greater the benefit once they’re installed. This can also have unexpected benefits to nearby areas that typically pond, or are slow to dry out. All that water has to go somewhere, and may times it ends up in the paddocks and yards immediately adjacent to our barns and outbuildings. But when it’s collected and channeled away, those yards stay drier.

2) put down landscape fabric, also known as "geotextile", then footing, in heavily traveled walkways, driveways, aisles and runways. The landscape fabric ensures that the dirt already there stays there. Rainwater can still soak through the landscaping fabric, so it won’t pond. The footing raises the vehicle tires, people feet and animal feet above the dirt and the water level even during downpour events. Dirt stays where it belongs, rainwater either moves down or sideways without making contact with feet, boots or tires, and everyone stays cleaner.

3) Designate sacrificial areas for livestock, separate from larger pens and pastures, where animals can be moved during short-term bad weather events. Those smaller areas can then receive the better drainage and footing materials, at much lower cost than doing the whole farm. Bringing the animals into those areas during bad weather events can also help ensure the animals are not out on pasture when storm activity can knock down fences and allow escapes. If areas have a traditional “wet season” or “rainy season” like we do in the winter, then seasonal housing with better footing, drainage, and raingutters can be a good investment.

5) Set up a manure storage area where those wastes can be constructively composted, rather than merely dumped out of sight and out of mind. That’s a tremendous resource which can either be used on-farm or sold as a product to nearby farmers and/or gardeners. Setting up compost piles, with adequate air for aerobic digestion and protection from rain, can turn a polluting waste product into an income stream.

6) Fence out streams, ponds and springs so that animals don’t trample down the embankments and shorelines. That will also protect water quality. An old farmer’s story says that two pigs can convert a 1 acre pond that’s 10’ deep, into a 10 acre pond that’s one foot deep, in the space of a summer. Any hoofed stock can do similar damage. If those water features are also water sources, consider fencing out most of the area but putting down firm footing in chosen locations to allow for, yet control, animal access.

7) Put bridges over any low-lying areas in walkways, aisles and runways. Not only will that keep everyone’s feet dry, but it will accomplish much the same benefits as the item above.

We have put most of these steps into effect here, in some way shape or form. Those features that we haven’t done yet, we plan to install as soon as we can manage. The difference has already been incredible. Winter housing for our animals has reduced knee-deep mud in some pens to coronet-band deep mud, or no mud at all. That makes for cleaner, happier, healthier animals. It also makes for better working conditions for me. Given that farm chores take a good chunk of each day, that time savings can make a big difference. But we’re not done yet. We have not yet finished the driveway and parking area. That area is not only large but it is also central to the farm. So we have to walk through it to get from Point A to Point B, and anytime we get into our out of our vehicles. So that’s the next item on our list. Additionally we need to put some small bridges across a low spot on our land that runs right through several yards, and which is crossed by no fewer than four aisles. That low spot often fills with water during the winter, and slows down chores every single time.

Most farms assume mud is a fact of life. It doesn’t need to be. Nor does it need to be expensive. We’ve managed to find most of the materials we need, including the landscape fabric, for free, by working with other folks who need to dispose of suitable materials. That has saved us a lot of money and made a lot of our efforts possible. It also meant putting roofs over animals that some folks would argue don’t need roofs, like our cows and horses. But if I’m feeding and cleaning them twice a day, that roof not only keeps them drier but keeps my chores list shorter. Mud control sounds like a fantasy but it can be as simple as figuring out a farm’s weak points and fixing them. Small changes can make big differences. Mud is one farm feature I sure won’t miss.