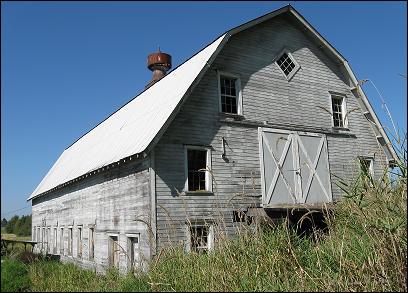 The farm where we buy our hay is what I would call a traditional farm, with all the familiar outbuildings we generally associate with American agricultural landscapes. The larger barn in particular is a gambrel-roofed beauty, made popular in the early 1900's on dairy farms around the country. These grand dames of agricultural architecture could house tremendous amounts of feed and shelter the herds from whatever vagaries the four seasons might bring. They were, and are, an endearing symbol of what some would call the Golden Age of American agriculture.

The big barn was added to the farm in the early 1930’s when it was in full production as a working dairy. The old dairy stanchions are still bolted to the wall, and there are four draft horse tie stalls with the names of the horses stencilled above - Marle, Cindi, Sylvia and Becky. More than once I found myself wondering what year those animals last resided in those stalls.

When the farmer I know bought the place in the early 60's, the man he bought it from had run the dairy for several decades, possibly since that big barn had gone up. I don't know much about that previous owner, except that he was tired of the dairy business. The big barn was showing some age at that point and needed quite a bit of work. The original foundation was sagging in places, wood rot had set in here and there, the roof leaked, and that previous owner just didn't have the energy to keep up with it anymore. So he was selling out. Yet the farmland was some of the best corn and pasture ground in the county, the other outbuildings were in decent repair, and business was as brisk as ever in the nearby county seat. That farm was well positioned to become a vibrant place again, given half a chance. The farm's big dairy barn may have been showing her age but she also continued to show her grace. She still had the original wainscoting, most of her rafters and floor joists were as solid as ever, and her loft could still hold a tremendous amount of harvested sunshine.

When the farmer I know bought it, he apparently put quite a bit of time and consideration into how to give that barn a new lease on life. He excavated the two corners that were built into the hillside, jacked up that end, and then had a new concrete foundation poured to replace the rotting foundation. He replaced the leaky, fire-prone cedar shake roof with metal roofing that has lasted to this day. He scraped and painted and reglazed and 100 other tasks to clean up that old barn and get her fit for duty again. He then turned his attention to the rest of the property, and proceeded to bring that farm back to life. It has been farmed continuously now for over 100 years, making it one of the older farms in the area.

Yet time still marches on, and now that farmer has reached a point in his life where he is looking at the day not too far off when he'll have to turn the farm over to someone else. But to his credit, he will be turning over a farm that he has kept in very good condition. Not only are the fields still productive, most of the other outbuildings have been kept in good repair. Best of all, his grand old barn was recently awarded Heritage Barn status by the state, which puts her in very dignified company. That status brought with it a bit of fix-up money to keep her in good repair. While the farmer had already done considerable work in that regard, he is using that money to provide a few new touches - a new cupola to replace the rusted out original, along with new glazing for the windows and a brand new paint job. The old gal will have a brand new outfit as she enters her 80th year.

The new cupola has replaced the old one in the photo, the glazing work is about to start, and the painting will proceed shortly thereafter. Meanwhile, the farmer continues to work the grounds, and has partnered with other growers in the area, us included, to keep the outlying parcels tended and productive. I'm not sure which lucky soul will be tasked with working that farm after this generous, thoughtful, conscientious man hands over the reins. It might be us. It might be someone else. It might be a group of people tasked with ensuring this farm is maintained as a working farm into the foreseeable future. But whoever it is, they darn well better look after that big barn and all her graciousness. It's not enough to simply plow the ground, plant the crop, weed, harvest and sell at the end of the year. Farms themselves are entities in need of proper care and feeding, if they are to live out their multi-generational life spans with dignity and good function. That farm has been very fortunate to be managed by such careful hands over her considerable lifetime so far. There are many other equally worthy farms in our area, and in our nation, in need of such careful tending. May those other farms, perhaps rundown and neglected now, be similarly resurrected to their potential life-giving potentials. It is a privilege to be a part of that process.