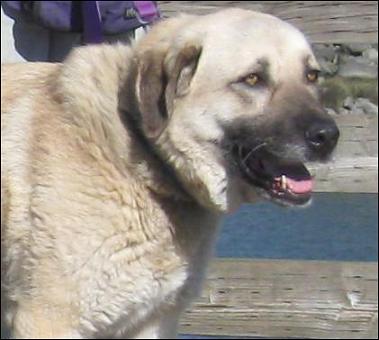 We got started with Anatolians as livestock guardian dogs back in 2007 with the arrival of a 10 year old Anatolian rescue, named Sam. He had been a guardian dog on another farm for his whole life, and a member of that farm’s family, until that farmer decided to retire and sold all his livestock. To that farmer’s credit, Sam was not dumped at the shelter but rather was given to a nearby sheep farmer who wanted a livestock guardian dog to protect his flock. Unfortunately for Sam, that flock was not near the house as had been the case at his previous home. Instead, it was parked out in a remote area. Sam went from having frequent, long-term human interaction as a member of the family, to having none at all. We don’t know much about his time at the sheep farm but apparently that sheep owner didn’t like Sam’s initial performance of his duties. After only three weeks, Sam was dumped at the shelter. That’s when the NASRN got involved. One of the NASRN volunteers pulled him from the shelter and placed him with a foster home, where his personality, skills and health could be assessed. Once that information was available, and he was determined to be a good adoption candidate, he was put up for adoption. While all that was happening, we had also contacted the NASRN to get more information about how to get started with livestock guardian dogs. We had goats, rabbits and chickens at the time, we could offer a family environment, stout fencing, daily interactions, and a fairly relaxed atmosphere. The good folks at the NASRN determined that Sam would be a good match for our needs, and we were willing to do the required work with him to ensure that we meet his needs as well. That adoption took place in July 2007.

Since then, we have adopted three other Anatolians. A whole book worth of information wouldn’t be sufficient to describe the adventures, the lessons, the work we’ve done and the work they’ve done, since they’ve each arrived here. Suffice to say we have grown to love and respect these dogs beyond any ability to express or measure. So when we learned earlier this month of an Anatolian named Pamuk at our county shelter, slated for euthanization, we felt compelled to work with her to see if we could get her off death row and at least foster her here.

Pamuk’s story is fairly typical. She had been purchased as a puppy by a man for his family, and for the first five years of her life she had been a welcome part of that family. Then a combination of family upheavals and economic conditions dictated that the owner had to move from their rural property to a small house in town. To his credit he tried to take her to that new home. But a very big dog in a very small yard, with a propensity to bark late at night, was not a good combination. He was forced to take her to the county shelter. One of the sad tendencies for Anatolians is that these proud, confident, self-reliant dogs don’t do well in shelter-type environments. Too much noise, too much activity, too many new faces and new animals is overwhelming for them. Some respond by withdrawing. Some respond by growing belligerent, and some respond with depression. Pamuk’s answer was a combination of assertive and dominant behaviors that took the shelter staff by surprise. Within the space of only a few days, she had exhibited dominant behaviors with enough of the staff that they deemed her too risky for adoption, and had slated her for euthanization. That’s when we got involved.

We have been working with her since the first of the month, using Alpha Dog techniques developed by other dog trainers to simultaneously establish our position as leaders while preserving her sense of pride and dignity. It has been a major upheaval in our work schedules to suddenly spend so much time driving to and from the shelter, and walking her two miles every day in a nearby park. But that’s what it takes to build that trusting, respectful relationship. Meanwhile, we have to build a new yard for her here on the farm, close enough to the other animals that she can see and become a part of what is going on, yet far enough away that she’ll have her privacy and personal space. We estimate another week or so, and we’ll finally be ready to move her home.

These dogs bring so much to the farm, but they require a tremendous amount of careful preparation and groundwork to be good partners. Not because they are stupid or hard to train, but ironically because they are so smart and willing to take over if they perceive a lack of leadership. Pamuk’s progress during these last few weeks has been phenomenal, to be sure. But our work with her is just beginning. We’ll need to continue establishing clear leadership with her, and ensure that any prospective adopter establishes the same. She, in turn, will provide what her breed has been bred for thousands of years to provide - loyal, competent, intelligent protection of farm, livestock and home, against any and all who don’t belong there. Her commitment to that job is absolute, and our commitment to her needs to be as strong. For folks thinking about adopting or buying livestock guardian dogs, we try to impress upon them both the amount of dedication that dog will have for their house and farm, but also the amount of dedication they’ll need to have for the dog, before that relationship can work the way it should. Pamuk is coming along nicely in that regard. We’ll see if any adoptive homes are willing to match that effort.