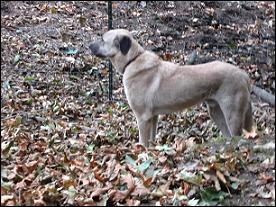 We’ve had livestock guardian dogs for several years now. And the longer we have them, the more we learn about all the different skills, and challenges, they offer us. Like any valued friend, family member, colleague or employee, it’s usually a mixed bag.

Sometime last week, as the weather finally broke for a few nice days of warm sunny conditions, the goats did something they do every spring. Namely, they found a weak spot in the fence and went for a walk. Unfortunately for their ambitions, they met up with two of our Anatolian Shepherds, who knew they weren’t supposed to be out and about. More accurately, the dogs knew where the goats were supposed to be, and suddenly they weren’t where they were supposed to be. Anatolians, like other livestock guardian dogs, quickly learn what is “normal” on the farm (or in the neighborhood) and their job is to preserve that status quo. We usually think of that work as keeping strangers off the farm. But in this context, it meant keeping the goats where they belonged. And Cougar and Pamuk did an admirable job. The goats had jumped a fence that ran alongside an aisle. That aisle, in turn, connected with the driveway at one end, and one of our big fenced browsing areas on the other end. The goats could have gone either direction and munched to their little hearts’ content. Except Cougar stationed himself at one end of the aisle, and Pamuk stationed herself at the other end of the aisle, thus boxing in the goats. The wayward goats had to entertain themselves in a tiny little side yard until I got home. The dogs didn’t chase the goats, or heckle them in any way. They merely kept them from going too far outside of where they were supposed to be. That is the nature of Anatolians - preserving the status quo to the best of their ability, with as little drama as possible. When I got home and found that situation, I got the goats back where they belonged, fixed the fence, and spent some time praising both dogs. Cougar is a veteran here with almost two years of service now behind him. But this had been Pamuk’s first real on-farm task, without supervision of any kind. She had done spectacularly well - just enough presence and confidence to keep goats from charging her, even though a number of them outweighed her two to one, yet absolutely no force or actual physical contact at any time. We want them to use only as much force as needed to get the job done and she’d done it. I praised them a lot that afternoon.

Only a few days later, we saw the other side of Anatolians, again with Pamuk. That particular day, I had put Pamuk out in a supposedly secure exercise run. Then I left the farm for the day to work at the partner farm. I had been at the partner farm for several hours, when my cellphone rang. “Hi, um, I have your dog here, I think her name is Pamuk. Can you come get her?” Apparently that secure exercise run wasn’t so secure. She had gotten out, apparently crossed our property, crossed the property next to us, and ended up at the property on the far side of our eastern neighbor. All told she had gone only about ¼ mile. But as I stood there trying to digest the concept that she’d gotten out at all, some very scary questions started to come to mind. Had she hassled any of the animals on our farm? Had she chased anyone else’s animals? Had she killed anything? Was she injured or scared or aggressive or…….. ???? The mind starts to race with all sorts of unpleasant images when presented with a phone call like that. I told my partner that I had to get home, and I’m pretty sure I sprayed all sorts of gravel out behind me as my truck flew down her driveway.

When I got to the neighbor’s, Pamuk was calmly laying down in their driveway, wagging her tail, while the homeowner crouched beside her, scratching her head and keeping her company. “Wow, she knows the sound of that truck!” said the homeowner. “She perked up right before you pulled in!” All of my nightmarish scenarios started to melt away. Apparently, she had wandered into his yard from the south, which meant she had avoided the road and had skirted the houses between our property and theirs. They had horses which she hadn’t bothered at all. She was wet, muddy, looked a little tired and actually to my eye she looked a little spooked too. The homeowner said that he had come out to his truck to get something, and she was sitting right there by the passenger door, as if waiting for a ride home. She had been friendly and respectful and cooperative as he read her collar to get the microchip info. She’d been with us such a short time we hadn’t gotten her a customized tag yet, but her microchip tag gave him the chip number and a 1-800 number to call. He called them, and they gave him her name and the agency which had chipped her - the shelter we adopted her from. He called them and got my name and phone number. The total elapsed time between him finding Pamuk and finding me was maybe 10 minutes. I thanked him profusely, gave her the command to jump in the truck for the short ride home, and off we went. Nothing at home was stirring, so she hadn’t gotten into any mischief while at liberty. I put her back in the yard, figured out how she got out, repaired that, then sat down and let my blood pressure return to normal.

Many, many people, and websites, will trumpet how livestock guardian dogs automatically know their job. They need no training, no socialization, no human contact of any kind. To all that well-intentioned advice, I say: WRONG. Yes, these dogs have 4,000 years of behavioral traits, instincts and intelligence such that they can determine what needs to happen even without human guidance. Like Cougar and Pamuk did when the goats got out only a few days prior. BUT, these dogs also live on farms and ranches which increasingly are surrounded by subdivisions, highways, schools, athletic fields and other human activities. Even in the wide open prairie county where I grew up, where I could walk all day in a straight line and not hit a single fenceline, human beings are increasingly coming in contact with the herds and flocks that these dogs protect. I believe it is not only our legal responsibility, but also our moral obligation to ensure that these dogs not only know their guardian duties, but also know how to interact with human beings. Both the good guys and the bad guys. Because you never know who they might encounter during the day. And we also need to do our very best to ensure that they stay on our properties. That homeowner who found Pamuk would have been in his rights to have shot her on sight. She was an unknown dog on his property. It was only his generosity that kept her alive. The fact that she got out of what should have been a secure yard was MY failing, which I promptly fixed. And finally, we must take the responsibility to ensure that our ownership and contact information can instantly be determined if, despite our best efforts, they do get away from us. Most folks, in most places, will try to reunite a dog with its home, if given even half a chance to do so. All the training and handling I’d done with Pamuk while she was still at the shelter paid off that day, when that homeowner was able to work with her so easily. We got our dog back because we opted to have her chipped, and we’d taken the time to ensure she worked well with people. But most importantly, we failed to keep her contained which could have resulted in catastrophe.

So for all those folks who want livestock guardian dogs to guard their homes, their possessions, their flocks, and their property, be advised: Some Assembly Required. The good news is, that effort pays off in ways which can’t be counted. We’ll never be without our Anatolians, even though sometimes we really have to work at providing and maintaining a suitable environment for them. The rewards from having Team Anatolian are worth every moment of effort, and every penny spent.