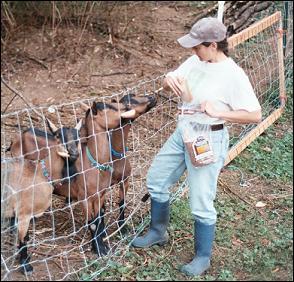 Me as a young(er) goat owner, feeding bread to our first three goats

It occurred to me after writing my previous blog entry that it’s not enough to merely say “there is a lot of information out there to help farmers run their farms more profitably.” That’s a general statement and without specific examples, it’s relatively worthless. So, today’s blog is devoted to listing and describing the sources of information that we’ve used in our own farm development efforts, and/or organizations who have helped farmers graduate from merely producing things to producing things profitably. This latter category is aimed at young and beginning farmers, but it is also applicable to anyone who has been running a small farm as a hobby effort, who is ready to move into profitable operations.

In our farm’s case, we have gotten most of our information from one of two sources: our county-level Extension Service and Conservation District offices. The former is a national network of offices, generally at the county level, and generally associated with that state’s agricultural university. For instance, our closest Extension office is WSU-Snohomish County Extension. We are not limited to the nearest office. Neighboring counties will often collaborate and share their resources, staff, and workshop schedules. We have attended workshops hosted by Thurston, Pierce, King and Skagit counties’ Extension offices. Our county’s livestock advisor program is coordinated by a staff member from the Skagit office, and many of the workshops hosted in one county will draw volunteers and attendees from surrounding areas. The Conservation District offices are set up in a similar way, but are not tied quite so closely to the land grant University system. Their funding sources are different, and their mandate is a little closer to resource protection and resource management. But they still work very closely with producers at all levels, as well as with local, state and national agencies. Boundaries between the two agencies can occasionally blur. But one stated mission of the Conservation District is to offer all their services in a non-regulatory-enforcement way. That means, if I know I probably have a manure pile that is leaching pollutants into a nearby stream, I can call the Conservation District about that and ask them to help me figure out how to design, permit, build and maintain a cost-effective, long-term solution. All without them starting or ending the conversation with “and we’re going to have to report this to the appropriate agency and you’re going to have to fork over $$$$ in penalties….” They are very motivated to help land owners and farmers to avoid or remedy compliance problems, rather than bust them for compliance problems. I should also say that the vast majority of services provided by both agencies are free to the farmer. Some workshops will have an attendance fee to cover the cost of handouts, refreshments, facility usage, etc. But the economic value of that free consulting has been beyond measure, at least for us.

To give an example of how the Extension Office and Conservation District work hand in hand for producers, consider one recent example. We are planning to license our farm as a Grade A dairy at some point in the future. Since we have no previous dairy experience or infrastructure on our farm, we’re starting from scratch. So we have been consulting with the Extension Office personnel regarding the business planning, food safety, marketing and regulatory requirements portions of that project. We have been consulting with the Conservation District to develop adequate, cost effective (and in our case, surprisingly low-tech) wastewater handing, manure handling and water quality protection strategies. Thanks to those services, we have tentatively designed an on-farm facility which we already know will be in compliance not only with national milk production requirements, but also will ensure no soil, air or water pollution issues for us, our neighbors, or anyone downstream. It has been a wonderful advantage to work all that out in advance, on paper, with consulting experts, rather than figure it out after the concrete has already been poured.

Those are just two of the agencies we’ve used over time. A third favorite of mine is ATTRA.org. The massive ATTRA website is a repository of hundreds (if not thousands) of articles and reports on just about every conceivable agricultural operation. Each article and report provides an overview of the issues, challenges, opportunities, regulations and economic considerations for that farming activity. These reports typically provide several case studies of growers who have already tried this approach, and what their results were. Additionally, and perhaps most importantly, each report provides a lengthy section devoted to Additional Resources - websites, research facilities, reports, books, etc. We frequently reference the ATTRA website when we want either a quick rundown of a given new topic, or more in-depth information on something. In the past year, we’ve researched the following through ATTRA:
On-farm Composting Methods
Marketing and Business differences between CSA’s and Farmers’ Markets
Cover Crops Management
Small Grains Production
Pastured Poultry
Greenhouse and Hoophouse Design, Construction and Management
Microdairies
On-Farm Commercial Kitchens
On-Farm Rabbit Processing

A third category of assistance is a relatively new development, but it’s something that I have found very encouraging. Namely, the springing-up of countless New Farmer/Young Farmer websites and support organizations around the country. These groups were not around when we first got started, and I wish they had been. But now there seem to be dozens of such groups all with the mission to provide support, mentoring, networking and logistical assistance to either young and/or beginning farmers. Some of these groups are offshoots of existing groups. For instance, our local Sno-Valley Tilth group has a new farmer mentoring program which I believe is only in its second or third year. Our region’s Cascade Harvest Coalition also has something called Farmlink, which is an attempt to pair up young landless producers with older landowners who are either retiring, selling their property, or simply wanting help to work their farms. But there are a variety of regional and national groups dedicated to helping this next generation get started either with work experience, and/or with actual farm business planning, design, execution and on-going management guidance. Here is a partial list of such organizations:

If there is a single mistake that struggling farmers are making now, it’s denying themselves all the how-to information that is available through such agencies and organizations. Whether they are just started out, need minor tweaks to an existing operation, or want to completely revamp the farm, that how-to information is out there. Even simple Google or Youtube searches will often yield impressive information on any given aspect of, or activity in, modern agriculture. For anyone who has said “gee, I wish I could figure out how to do X”, the answer is as near as your nearest internet access. There’s more information out there now than ever before, on how to farm, farm well, farm profitably and farm in ways that provide and protect a wonderful quality of life. But it’s up to each of us to go get that information and make use of it. I sincerely hope a lot of folks choose to do so.